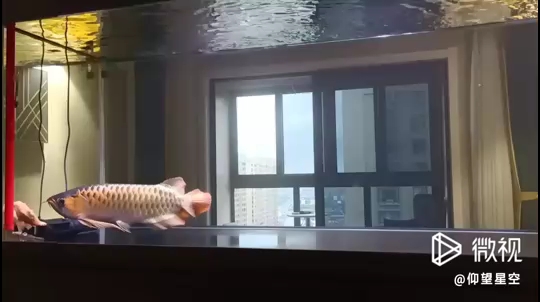 The National Day holiday continued to toss. Two days ago, I took out the matching fish of Arowana, the thick line, and took it out. why?Have you noticed that the thick line, such as Thai crucian carp, is too lively, and will always bite the arowana fish.The crumbs are spread out and deposited on the bottom of the tank, and then the duckbill at the bottom of the tank blows up. Its like me. The tank is bigger and needs a wave pump. When the water blows, that guy, the fish will float in the tank. What a spectacular scene.[haha] 粗线拿出来，观察两天之后，发现效果蛮不错的.The wave pump blows regularly, and the cylindrical segmental fish stools heavier than the broken pieces will mostly go directly to the bottom of the tank and go to the overflow port to be sucked away. The tank is very clean, and there are no more pieces of broken pieces.In the end, there will be no "magnificent landscape"[deyi]where fish will float over the tank, and the whole tank will look more refreshing. The thawed and cleaned fish food before feeding was swallowed by Arowana in seconds without food residue.The thick line seems superfluous at the moment. What do you think?
========How did the fish friends of the Xianglong Aquatic Alliance comment==
Just try hard, Yuyou said: How much is the water level full of tank?
Uncle fell in love with fish, Yuyou said: no fish, high tank, space
shibin18 Yuyou said: Yes
Yang Tianchang XdTl Yuyou said: And I still have stingrays, it is not suitable to use the wave pump to blow the bottom.。
Yang Tianchang XdTl Yuyou said: Big fish pulls the stool, not crushing means you have to go to the straw to handle it manually, the broken into the filter are all on the cotton, regular cleaning is also possible, as long as the filter is strong enough, flying in the sky is shortOnly time.I hope its broken anyway because Im lazy
What about my Ote Egg? Yuyou said: Air cylinder
Nicholas_Kun Ge Yuyou said: simple and beautiful, I feel that the dragon is still well raised
Tengyun Hongchen Yuyou said: A good fish is different
Zheng Xiangwei Yu You said: Thank you for sharing
Bohu efFd4 Yuyou said: Its fun to play with a pig nosered package
pink arowana(
2.68 million red dragon fish%
Red Arowana Photo/
Red arowana eating cockroach$
Red arowana up and down,
Emerald Red Dragon Fish: