I found the first cylinder, Then photographs, this year the group off before the Ching Ming Festival.Only the second golden fish still live in, but also grown up a lot! 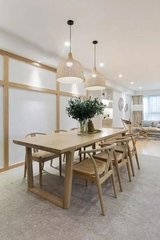 Previous page：Changing the water every day to read the news